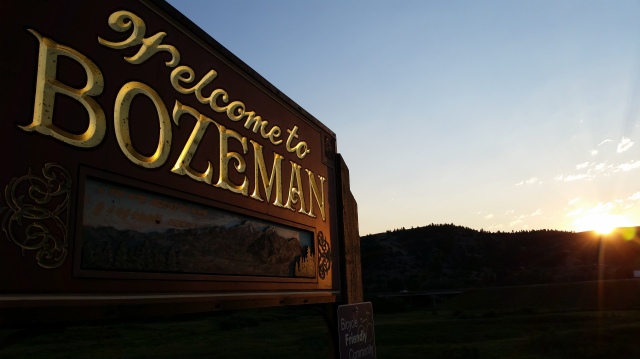 I staggered into Bozeman, Montana at around 7 pm local time. I’d been on the road since about 6 AM, stopping only for lunch/blogging time at a Bismark Starbucks and for a quick espresso at City Brew in Miles City, MT. I was exhausted, my knees ached, my nerves were frayed from all the steep mountain driving. I had no plans for lodging; my hope was to just find a quiet place to park and spend another night in the Impala. But I was so tired and so desperate for a shower that I sprung for the Ranch House Motel, the cheapest place I could find.

I had been told that the drive into Montana through North Dakota was tough, but nothing quite prepared me for the brutality of yesterday’s drive. I complained in my last post about how dull and desolate the North Dakota scenery was. The countryside actually became more lively as I drove West from Bismark, but it remained desolate throughout. Mile after mile of emptiness, emptiness that’s beautiful in its own way but hard to stomach for someone so used to civilization.

It’s hard to describe just how vast this country is until you actually navigate it. That’s why I said in an earlier post that driving across the country is the only way to truly understand America. The West is so fucking big, so dry and hot and unforgiving. It amazes me that pioneers managed to cross this terrain in ox-drawn wagons, and it absolutely astounds me that Native Americans once lived here without even the advantage of horses.

Little cities I’d never seen or sometimes even heard of became benchmarks of my progress. “Okay, only 130 miles to Miles City…”

“GOD DAMNIT WHEN THE FUCK AM I GONNA REACH MILES CITY!?!”

I almost didn’t make it to Bozeman; I was powerfully tempted to stop in Billings and call it a night. But I’d been told that Bozeman was so much cooler, an artsy college down nestled at the foot of the Rockies. The drive from Billings to Bozeman was some of the hilliest terrain I’ve ever navigated. I forced my tired body to remain focused. By the end I was driving well under the 80mph speed limit. The scenery was unbelievably gorgeous but that was almost a hindrance; I was afraid that I’d stop to admire a bluff or a valley or a view of the Yellowstone River too long and wind up careening off a cliff.

But ultimately it was worth the effort. Bozeman really is an awesome town. I mean “awesome” in the literal sense of the word, as it inspires awe. The scenery is tremendous, especially in the early morning and late evening hours. It also has a quirky college town vibe that, I hate to say it, reminds me of Madison.

For instance, walking back to the motel from Main Street I found this:

No idea what that’s all about, but cool!

Today I have a number of different options for exploration but first I have to get a new GPS system. My Garmin, upon which I’d been relying for navigation this whole time, broke down sometime between Fargo and Bismark. This didn’t really affect my drive into Bozeman as it’s really just one highway the entire time, but I know I’ll need a new GPS for more complex cities. (I can’t rely on my phone too much; it’ll drain the battery and use up precious data).

Thanks again for liking and sharing this stuff on Facebook/Instagram! I’ll be camping in Hall, MT tonight and then it’s Missoula tomorrow. Until then, here’s today’s selfie:

One thought on “Day 4: Bozemania!”