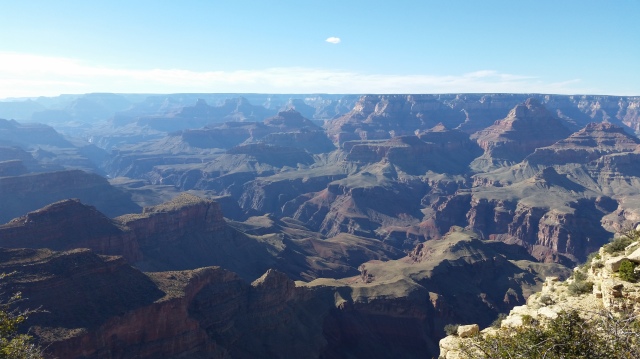 Yes, as you can see I visited the Grand Canyon (two days ago, that is. I’m slowly catching you up, ghostlings). But before we dive into that, let me relate my last few hours in Phoenix.

I had a couple hours to kill after the game before I had to drive up North. This was clearly not enough time to appreciate a city so I really didn’t even try. I was hungry. One of my Wisconsin friends had recommended a burger place in downtown Phoenix but I couldn’t remember the name of it. Then I spotted this joint about a block from the ballpark: 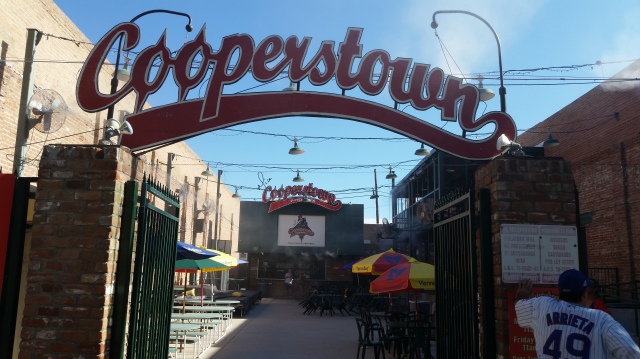 Coopers’town! A cheesy sports bar owned by legendary rocker Alice Cooper. I decided to give it a shot, figuring it would be worth at least a few good pictures.

Okay, well maybe not the best pictures, but whatever. The place was about what you would expect; overpriced entrees with corny names (“The Chicken Incident” Chicken Wings, “Billion Dollar BLT,” etc.), waitresses wearing Alice Cooper-style makeup (but not the male servers, for some reason), and big walls adorned with a mix of sports and rock and roll memorabilia. It wasn’t the finest dining in Phoenix, but that’s what I get for not properly googling a city before I arrive.

I regret not making a more sincere attempt to dig the digs in Phoenix. From what I could tell it’s a fine city with nice people, cheap gas and minimal traffic. I’ll definitely be back someday, hopefully in the wintertime.

I stayed that night in an obscure town vaguely near Flagstaff. I chose it because it was the cheapest listing on Airbnb and only a couple hours from the Grand Canyon. Usually I give my hosts an hour or so heads-up before arriving, but for some reason I forgot this time, so when I arrived at the gritty trailer park in the middle of nowhere the hostess was understandably flummoxed. I was a bit ashamed, and things got even more awkward when she told me that her husband had just been diagnosed with stage IV cancer and she had almost cancelled my booking. I didn’t quite know what to say. I offered to simply leave; it seemed like the kind of town where you could park your car almost anywhere and sleep overnight. But she insisted on accommodating me and even offered me a free meal (which really made me regret visiting Coopers’town).

I went into the bedroom, went to sleep, and took off as early as possible the next morning, trying as hard as I could to be a Milford Man (i.e., “neither seen nor heard”). She told me that she and her husband were leaving for Phoenix the next day in order to get a second opinion. I didn’t get a chance to talk to the man but I’ll try and keep him in my thoughts and I hope things work out for both of them.

I arrived at Grand Canyon National Park at 7 AM the next day and parked in the Visitor Center. I had planned to visit the South Rim, which I’m told is the touristy part; the cool kids prefer the more elevated and forested North Rim. But nonetheless what I saw blew my mind.

It’s hard to think of anything original say about a place so iconic, so ingrained in the mythology of American Tourism. It fully deserves its reputation as a place of otherworldly beauty, a sight that everyone absolutely must see in person. Every layer, every crevasse, every peak testament to the slow but relentless exertion of nature.

Maybe it’s something about observing a place so timeless, so infinitely grandiose. In world where a cell phone becomes anachronistic two years after its release, seeing something that took millions of years to produce and whose delicate grace will probably outlive the humanity is quite a refreshing experience.

If you go to the Grand Canyon, make sure to check out not just the Rim Views and the popular hiking trails but the little historical bits as well. There are a respectable number of exhibits devoted to Native history of the region, as well as a fascinating timeline of the Grand Canyon Village, the tiny town that grew up around the park, which evolved from a seedy, disorganized boomtown into a respectable community through competent (though belated) government planning. Also not to be overlooked are the plaques that commemorate the work performed by the Civilian Conservation Corps, a New Deal organization that enacted many essential renovations to the Grand Canyon as well as many other national parks. The latter two points just go to show that although nature provides us with endless allure and amusement, it takes human cooperation to preserve it and keep it accessible.

After a long day at the Canyon that gave me my darkest sunburn to date, I retired to the nearby Kaibab National Forest, where you can camp for free if you don’t mind the lack of restrooms or any amenities besides firepits. I found a site about a mile off of a rugged dirt road and pitched my tent. As I was gathering sticks for a fire I ran into this:

Bones, and not from a chicken dinner. They were scattered all over the campsite and definitely came from a large mammal of some kind. 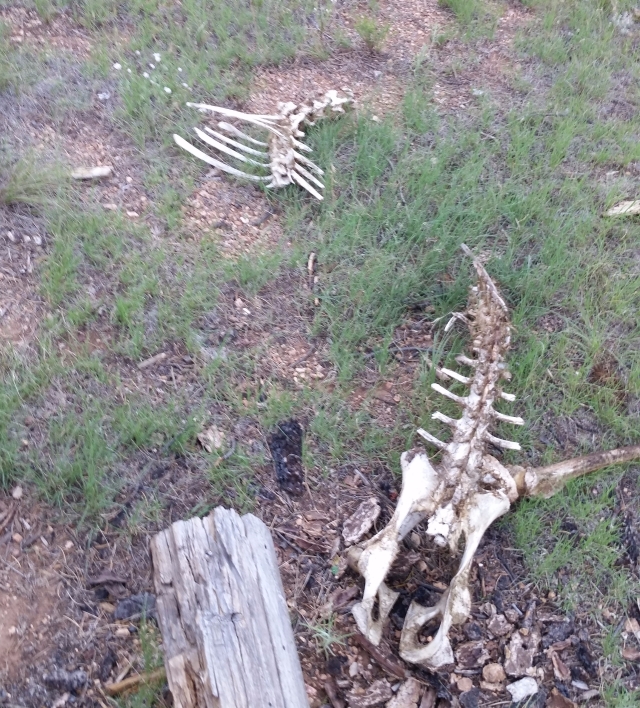 It was magnificently spooky. A poetic reminder that I was deep in the heart of Nature, where the specter of death perpetually looms.

The Kaibab Forest was the best camping experience of my life. There was plenty of dry wood to be collected and I built a fire with ease. I used the firelight to read a book until the stars came out. Then I simply laid on the grass, studying the most magnificent starscape I’ve ever seen in my life. I was blissfully alone; neither a motor nor human voice to be heard, just the ambiance of wind and the distant yelp of coyotes.

I lay there until the fire ran out of wood.