Sitting here at a swanky coffee shop in downtown Dallas – brief pit stop on the way to God-knows-where, Arkansas – it occurs to me I should have done the Austin post last night. I had time and more than enough material. Something was standing in my path, blotting my vision, a metaphorical storm cloud not unlike the literal ones I dealt with on my way into Texas. Maybe it was the long day, the hot sun, my weeks of poor and spotty eating, the stress of travel, that hour I spent walking around downtown Austin when I couldn’t remember where I parked my car, or all of the above or none of the above.

The point is that I fell into a funk, a malignant depression that threatened to derail everything. For a brief but nasty period I just didn’t care; I was ready to quit the blog and go home. Or maybe just drive until I found a seedy motel and called that home. Or just drive off a bridge.

And all the while the Muse was still there, its voice distant and muted like a starved and delirious man trapped in a mine shaft;

What are you doing? It’s Saturday night! You’re in fucking Austin, one of the nightlife capitals of America. You really can’t think of anything better to do besides sit there over an expensive pizza and sulk?

Dude, why don’t you call up that dude Ryan that you know from Madison?

Of course, my depression didn’t last forever. It cleared up the next morning, as it usually does. I’m no stranger to these feelings. I’m reluctant to bring this stuff up, I don’t want to scare my parents or anything, but I feel like I owe you ghostlings a certain degree of honesty. This Tour has been the best thing I’ve ever done, but of course there are moments of darkness, frustration, loneliness, and (I hate to admit it) homesickness.

There’s also just a lot of weird shit I haven’t had the chance to mention simply because I don’t have time to write about it or it won’t fit neatly into the narrative of the post. For instance, I never told you about the weird leg injury I suffered while camping in Arizona:

Look at that shit! Isn’t it nasty? I got it while tripping over a log in my rush to collect dead branches to keep my fragile fire burning. Luckily I had a first aid kit nearby and was able to sanitize, disinfect, and later dress the would but still I feel like it’s of marginal significance, like a plot point from a novel that gets lost during the adaptation to a screenplay. I have at least a dozen moments like that packed away, maybe over the coming weeks I’ll find time to enumerate them, or maybe you’ll just have to wait until I randomly bring them up over that beer I owe so many of you.

I made it into town just about noontime. I was hungry, so I headed for Franklin Barbecue, which I had been told is the best pit BBQ in Texas. I had also been told that I would have to wait in line at least two or three hours. This seemed like an exaggeration, but sure enough I found myself queued up from 12:15 until 2:30, most of that time outside in 98 degree weather.

I didn’t really mind, though. I reminded myself I was unemployed with no real agenda. I dug out my copy of On the Road (the book I’ve been reading for the past couple weeks, for obvious reasons). I watched the family ahead of me; yes a family with two small children including an infant. I wondered how the parents expected the kids to sit patiently but remarkably they did. I watched the dad take a fresh cold bottle of beer and use it to cool the feet of the infant, to her delight. It made me smile. I stared at the names and messages written into the outside walls: 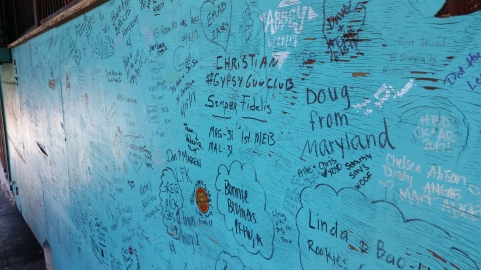 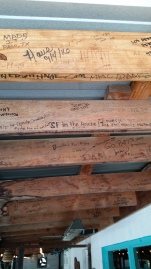 Waiting for hours at Franklin seems to be a rite of passage in Austin, and boy is it worth the wait. Impossibly tender and juicy brisket that melts in your mouth. I just had a sandwich – a reasonably filling sandwich no less – but I could have had more. I could have eaten until I passed out. I was sold. Texas BBQ is the shit.

Later that night I went to the South Congress Bridge, famous for the bats that fly out from underneath at sunset each night. For 45-60 minutes people gather to watch thousands of bats emerge from the concrete ceiling, so many that it’s hard to believe they can all fit there. They take off in a cacophony of screeching and flapping, flying over the river and into the night. Occasionally one will diverge from the bat masses and follow its own path; I tracked several such loners as long as I could. The whole spectacle was quite delightful.

The next day I headed for the Lyndon B. Johnson Presidential Library and museum. I had noticed this existed in Austin and wanted to see how it compared to the Nixon Library. The biggest difference was that the LBJ library contained several floors of archives available only to academics, which to the best of my knowledge the Nixon library doesn’t. Furthermore, while both presidents had installed recording systems in the White House, only the LBJ takes advantage of this fact; providing multiple stations where you can pick up a phone and listen to bits of Johnson’s recorded conversations with Bill Moyers, J. Edgar Hoover, and Martin Luther King, among others. Through the dialogue one can really get a sense of LBJ and his razor-sharp political wit. It was really my favorite part of the museum.

Like the Nixon library there were several exhibits that sought to explain the context of the times, the tumultuous and incredibly eventful sixties, and how Johnson’s agenda fit in. Whereas the Nixon library merely suggests that the man healed a divided country through his speeches (particularly this one) LBJ can point to a litany of real policies that had a lasting impact on our country; the Civil Rights Acts, the Voting Rights Act, Medicare, Medicaid, Head Start, and the list goes on.

The library does struggle in dealing with Vietnam, the quagmire that ultimately destroyed Johnson’s presidency and with it the Great Society. It meekly tries to apologize by stressing how Johnson was only acting on the military’s recommendations, and how he and the rest of the Establishment were convinced that we had to stop every Communist uprising we could. The subtext of the argument is that the situation was impossible and no president could really have escaped it without America losing face. Maybe some of that is true. I just wish we were able to learn from history.

There’s more to discuss with respect to Austin, but it might have to wait until later. I need to hit the road; I want to make it to Nashville in time for the Eclipse tomorrow so my plan is to just drive as far as I can in that direction. Hell, the same strategy worked with respect to Austin itself.

I’ll keep you posted, ghostlings. Thanks for sticking with me.