As I was researching things to do in the city of Atlanta I noticed that World of Coca Cola – a museum dedicated to America’s favorite diabetes risk factor – was located right next to the Center for Civil and Human Rights.

Marveling at the juxtaposition, I recognized the potential for a wonderfully ironic adventure. Here is the duality of America in one convenient package; the hollow dream of consumerism and the sincere dream of struggle. And they both charge the same admission: $18.

It was rather unbelievable to me that one could dedicate an entire museum to a fizzy sugar drink, and still more unbelievable that I, a grown-ass man, would pay to visit it.  But I was far from the only one. The place was packed with families from all over the world. There was some kind of touring student group from South Korea. This is a well-staffed, well-thought out tourist destination that takes itself seriously.

As I’ve touched upon briefly in my remarks on Starbucks, I genuinely respect good marketing even if I don’t care much for the product. And Coca-Cola are the Beatles of marketing. Not only are they the best, they’ve taken it to a level no one ever thought possible. They have outdone Christianity and Communism in their ambition to plant their flag in every corner of the globe. Together with McDonald’s it’s become shorthand for the dominance of American consumer capitalism.

Upon entering the museum they have you sit through a six-minute introductory film. I some kind of historical documentary on the product but it was nothing of the sort. It was basically an extended Super Bowl commercial comprised of multifarious sappy slices of life – a couple announcing their pregnancy, a grandmother celebrating a birthday, a kid getting his first kiss at Christmas – all somehow, impossibly, connected to Coca-Cola. It was well-produced propaganda – people actually clapped at the end – but the premise was so absurd that I was left with my jaw agape. The balls on these people, I kept thinking to myself.

And yet they do that continually, shamelessly, at nearly every exhibit; a meticulous, melodramatic pitch that this drink can claim some portion of the upper reaches of human emotion. The fact that they’ve pulled this off successfully, continuously, for more than a century in this supposed Age of Reason will one day command the attention of future anthropologists.

There are a lot of genuinely fascinating artifacts at World of Coca-Cola. It’s amusing to see the early advertisements, the initial marketing of their product as a “brain tonic,” the ads designed for foreign markets, the mini-memoriam to “New Coke” – their failed 1980s attempt at changing the formula – and, most curious to me, a wall of “Coca-Cola Stories,” where visitors write down their “memories” associated with the product and post them on a wall.

But the museum’s pièce de résistance is undoubtedly the Tasting Room, where you can sample more than 100 Coca-Cola products from around the world. Stuff you’d never even imagined; a watermelon-flavored drink available in China, a vaguely coconut-tasting beverage from Italy. Amazing stuff. I wanted to sample them all but thankfully a small part of my rational mind begged me to stop. I’ve done enough damage to my teeth on this trip as it is. 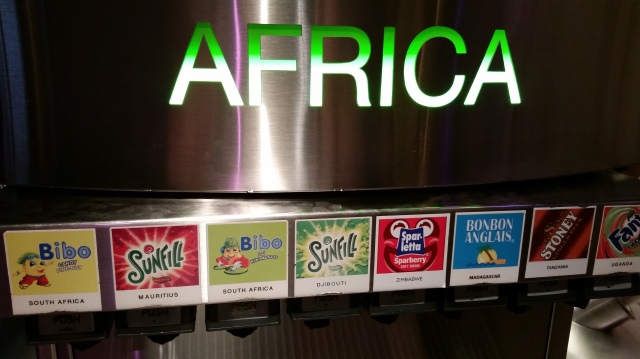 After drinking my fill of the surreal World of Coca-Cola, it was time to enter the very real world of the Civil and Human Rights Museum. And I have to say, I’m glad I took the time to visit. Of all the many places I’ve visited on this Tour, there are only a couple that I would say Everyone Must Visit. The first is the Grand Canyon, simply by virtue of its incomparable beauty. The second is this. Whereas the King Center seemed too modest and underfunded to do justice to the legacy of the movement, the Atlanta Center for Civil and Human Rights is exactly the sort of monument the Movement, and our nation, needs. I fancy myself an American History buff and I still learned a ton of information of which I’d had no inkling before.

For instance, have you ever heard of Claudette Colvin? She was a teenager who was arrested for refusing to give up her seat on a segregated Montgomery bus, months before Rosa Parks did the same thing. However, the movement chose not to publicize her struggle because she was deemed too controversial. She had a baby out of wedlock, and was described as too “feisty” and “emotional” to gain the sympathy of a white audience. So they threw their weight behind Rosa Parks, who was older, calmer, and more dignified, (as well as lighter-skinned).

The museum exhaustively explores every aspect of the struggle, from absurd examples of Jim Crow laws (in Georgia a white amateur baseball team could not legally play within two blocks of a black team) to nation’s black trailblazers (from well-known figures like Jackie Robinson down to the first black Supreme Court page) to the dozens of black businesses, churches and newspapers that played a significant role in the movement.

Particularly moving was the March on Washington exhibit. We typically associate this moment with MLK’s “I Have a Dream” speech but as the exhibit proves it was so, so much more than that. Here again I learned of an underappreciated hero; Bayard Rustin. This was the guy who handled most of the logistics of organizing the march – not a small task when you’re talking about 250,000 people, but because he was openly gay, a conscientious objector in WWII, and formerly associated with some Communist groups, he didn’t get the credit he deserved. Here, again, the museum does a terrific job of paying tribute to such unsung heroes.

The Civil Rights museum features many mini-theaters that play original documentary footage (of March on Washington speeches, the Freedom Riders, MLK’s assassination, etc.). Most of these theaters have boxes of Kleenex ready nearby. It simply is that powerful. I could go on writing about it for hours but this post is already getting too long. I’ll simply conclude by saying that this is something every American should see. If you have any kind of soul it will make you a more thoughtful person, at least for a while.

3 thoughts on “Georgia On My Grind: Part II”