Before we begin, I want to open this post with a quick shout-out. I stayed with my aunt and uncle in Georgia and have not given them nearly enough credit for their hospitality. They fed me, did my laundry, took me to shows and even sent me off with two large bags of groceries. But what I appreciated most was their company. They’re both terrifically cool people whose lives are fearlessly devoted to creativity and passion, something I hope to emulate in my own feeble existence.

My aunt is a writer, and unlike me she’s actually talented. She gave me a copy of this book of hers, which I’m reading at the moment. 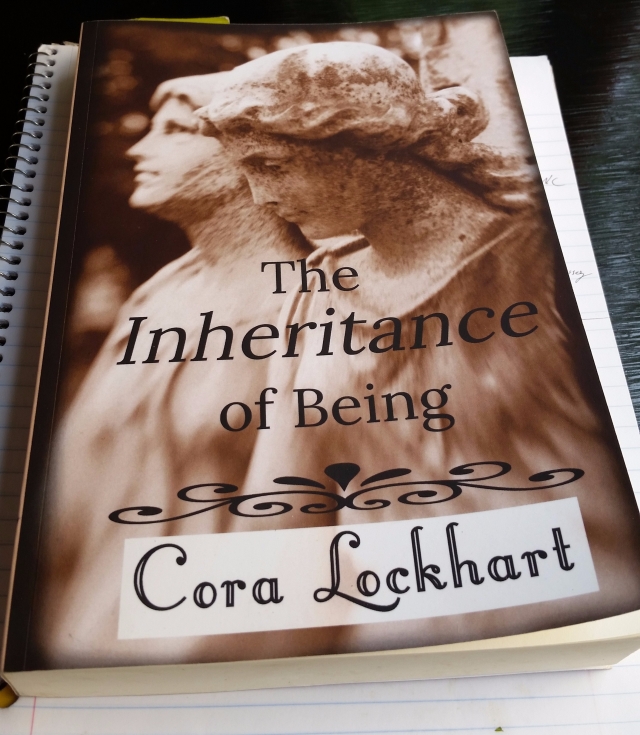 If you’re a fan of ghostly mysteries, you really should check this out. Learn more about Cora Lockhart’s amazing writing here.

As you know, I write most of these posts from coffee shops. I ran out of Starbucks gift cards a long time ago so I’ve been devoting more of my attention to local and independent haunts. In my travels I’ve noticed a trend in the Hip Coffee Shop scene: an ambition to take over and re-purpose old defunct buildings – warehouses, factories, mills, what have you – the older, more obscure, and more divorced from anything related to food service the better (the brewpub scene is equally guilty of this).

However, this one little spot in Asheville, North Carolina takes the cake:

That’s right, a Double Decker bus turned into a coffee shop. And the crazy thing is that it actually kind of works. You order on the lower level and dine either on the upper level or outside.

The interior has been painted a cute teal blue and redecorated with mini-chandeliers and mosaic-tiled tables to make the small dining area as charming as possible. I’m currently hearing Neil Young’s “The Old Laughing Lady” from the tiny Yamaha speaker in the back. It’s as if this place were calculated to tug at my heartstrings. 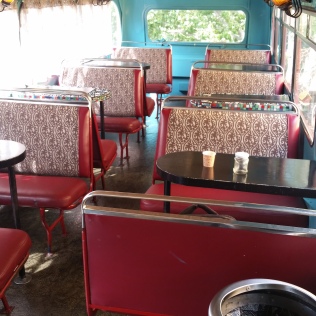 I’ve spent most of the past 48 hours out of cell phone signal range. When I came back into civilization this morning I had more than a few backed up emails and texts. One was from my dad, who asked me where I would be on Saturday. Shit, when is Saturday? I had to check my phone to remind myself of the date. I realized I’d been on the road for over a month.

They say that you have to do something for a solid month before it becomes a habit. If I’ve developed any habits over the past 31 days, it’s a stark lack of habits. I eat, bathe, brush my teeth and take my vitamins at any hour I happen to remember to remember that these things are necessary. I’ve lost a ton of weight and my muscles have atrophied to the point where it’s actually hard to carry my luggage. My hair and beard are a constant mess. I’ve become dangerously unconcerned about my appearance; right now as I type this I’m wearing Union Jack socks inside my sandals.

Almost everything I do now is ad hoc. In the beginning of this journey I had a strict itinerary on Google docs complete with miles between each city and a few top attractions therein. That’s all out the window; I haven’t looked at the doc since at least Austin. My current planned route – from Asheville to Raleigh to Virginia Beach to Baltimore – was hastily planned before I left Georgia, and more or less on a whim. I have no idea what I’ll visit in any of these cities. When I enter a new city, my M.O. is basically to set my GPS for a random coffee shop, sit down, connect to their Wi-Fi, and hop back on Google to figure out what that city has to offer.

One of the nice things about being East of the Mississippi is that the cities are packed closer together without the vast stretches of nothingness between. I plan on taking advantage of this; no more days of 10-hour driving, I’m taking it nice and slow.

Anyway, I suppose I should catch you up on what I’ve been doing. I wrote my last post in a gorgeous little coffee shop in the town of Ellijay, GA.

From there I drove up to the Nantahala National Forest, a huge swath of Appalachian Wilderness that stretches over North Carolina, Tennessee, and I think part of Georgia. My plan was to set my GPS for Robbinsville, NC – a town roughly in the middle of the forest – and from there seek out a quiet forest road for some primitive (read: free) camping. I’ve been relying on my Garmin GPS system for most of this Tour, and for the most part it’s been a reliable partner. This time, however, my Garmin straight-up fucked me over, and sent me on an off-road adventure that gave me some of the biggest terrors of the trip.

Somewhere outside of the little town of Andrews my Garmin told me to turn onto Tatham Gap Road. I obeyed, not realizing the implications. Tatham Gap “Road” is an extremely rugged, narrow, dirt pathway that winds perilously up a steep mountainous pass. It reminded me of my horrifying drive on California’s Highway 1, with three key differences: 1.) Highway 1 was paved, 2.) It at least had some guardrails during the most dangerous passes, and 3.) It had two distinct lanes and was wide enough to accommodate two cars going opposite directions.

This rocky, rambunctious, primitive pass did not seem like it was intended for vehicular travel. And as I soon learned, it wasn’t…

Yes, I was literally traveling on the Trail of Tears. An acidic, foreboding sickness burned in my chest. I cursed my GPS. The blasted device, perhaps inhabited by the ghosts of vengeful Cherokee, had deliberately directed me to an inglorious death off these wretched backcountry cliffs.

But of course I had to keep going, for the sake of this blog, if not my own life. Slowly, cautiously I plodded on. I scanned for a radio station to help calm my nerves. I could only get one; a static-y FM station broadcasting some Christian sermon. I shut the radio off. If I survive this hellride, I thought, I’m doing it without God’s assistance. I got myself into this mess, I can get myself out.

Finally, after a long, bumpy, agonizing period of time the terrain began to flatten out and I came upon a sight that gave me sing inside: PAVEMENT! Sweet, smooth, solid surface that could be traversed at more than 20 miles per hour. I felt like a homeless man who, in the depths of a snowy winter, had chanced upon a free Bed and Breakfast. Never had I imagined something as simple as a flat asphalt surface could bring such unparalleled joy.

10 minutes later I was in Robbinsville. a moldy hinterland colony where chickens roam free in the front yard and men in camouflage hats drink beer on the porch. I drove North on Highway 129 (the road any rational GPS would have used to get me into town) until I found a tucked-away campsite near Lake Santeetlah. I arrived just in time to set up my tent, and to catch a masterful mountain sunset.

The next day I headed up to the Smoky Mountains, approaching from the Tennessee side. I devoted the entire day to hiking, first the Rich Mountain Loop and later the Anthony Creek. By now I’d learned my lesson from previous hikes. I strapped up a pair of hiking boots I’d bought in Albuquerque and packed my bag with plenty of food and water. My reward was mile after mile of lush woodland glory. 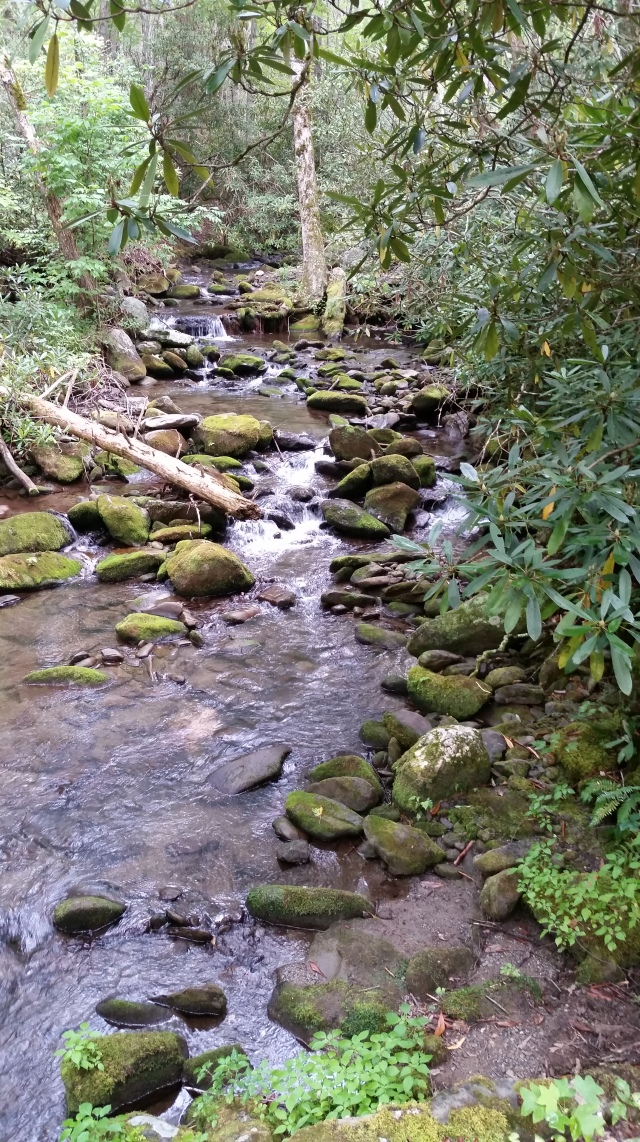 The only thing I didn’t see was a bear. The Smoky Mountains are home to an abundant black bear population (there are signs everywhere warning you not to leave food around for them) and I’ll admit a part of me desperately wanted one to appear in my trailpath so that I’d be able to snap a pic of it for this blog. Something is deeply wrong with me; have I not already pushed my luck countless times during this excursion?

Bear or no bear, the past 48 hours have been a delightful retreat-within-a-retreat. From here on out I’ll probably be sticking to dwelling places with rooftops and showers, but one never knows. The Call of the Wild may beckon me yet again before this is over.

One thought on “Appalachian Action: Camping in the TN/NC Backwoods”