It’s almost over, ghostlings! Within a couple days I’ll be back in my hometown of Madison, WI. Driving through the Midwestern landscapes of Ohio and Indiana – as the rugged hills gave way to flat stretches of farmland – I already began to feel a bit more at home.

Before I share my thoughts on Cincinnati, I have to tell you about the house I stayed in last night. 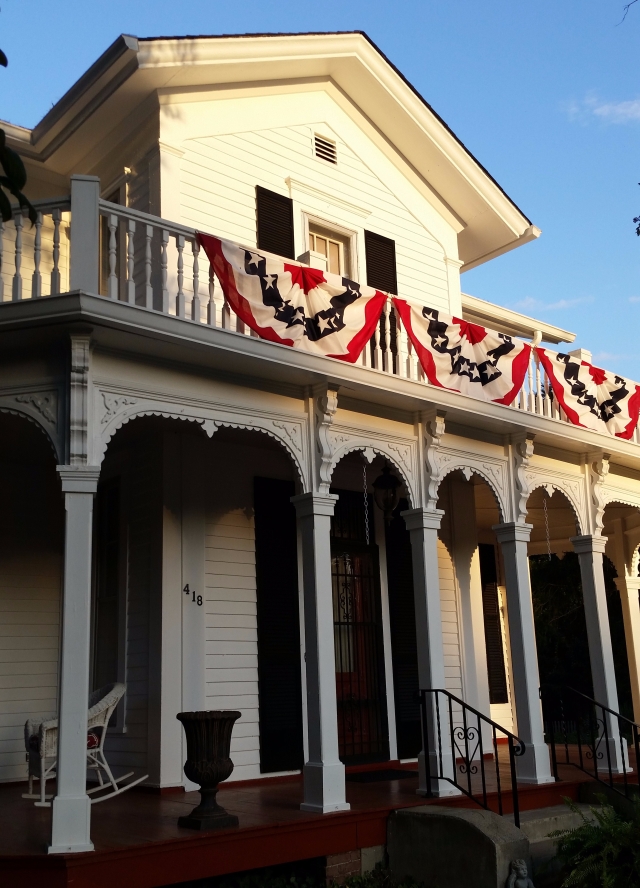 This delicious Victorian abode in Danville, Indiana is the home of Bonnie, an old friend of my parents. Bonnie received me with a level hospitality that was above and beyond what I deserved, even though I hadn’t seen her since I was six years old. As I sipped on her homemade vegetable soup she regaled me with the long and fascinating history of the house.

The home was originally built by John V Hadley, a 1st Lieutenant in the Union Army during the Civil War. Hadley was captured by Confederate forces but managed to escape with the help of local slaves, sleeping in the cornfields by day and traveling by night. When he got back to Indiana he became a lawyer and ultimately ended up Chief Justice of the Indiana Supreme Court. He wrote a book about his Civil War experience called Seven Months a Prisoner, which Bonnie had in her home, along with a huge dossier of historical information related to the house and the town of Danville itself. I ate it up with as much gusto as I did her home-cooked meal. There’s something so enchanting about staying in a place that historic. It’s as if you get to take small part in a great legendary epic, like being an extra in a Lord of the Rings movie.

But yesterday was really all about Cincinnati. Like Pittsburgh I came to this city basically on a whim. It was a city on my map that happened to be on my way back home. It wasn’t until the morning I left Pittsburgh that I began to pore over Google for things to do in the Queen City.

I learned that there was a free screening at the Cincinnati Art Museum that night. Perfect. I like movies, and I like free. The film was a documentary about the rise and fall of neon signage. There were about 30 people in attendance, out of which maybe 4 or 5 were fellow millenials. The screening was hosted in part by the owner of the American Sign Museum, a Cincinnati attraction which I hadn’t known existed until that very moment. He and his associates were passing out free passes to the museum. How fortuitous! Now I knew what I was going to do the next morning.

A sign museum… who could imagine such a thing? Yet this was exactly the kind of thing I was hoping to find in Cincinnati; the sort of attraction that just isn’t replicated anywhere else. As much as I love art and history museums (and, from what little I saw of the Cincinnati Art Museum, it is impressive) I’ve seen so many of them lately that my mind craves novelty above all. Thus the prospect of a museum dedicated to such a strange niche attracted me like the very objects the strive to exhibit. 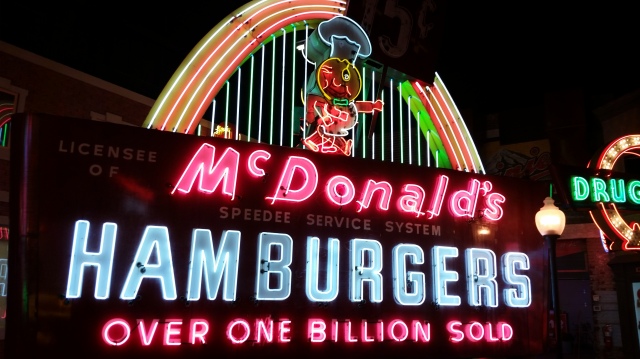 In all seriousness though, the sign museum was pretty cool. It takes itself seriously and collects artifacts from across the U.S., often restoring dilapidated neon units into their warm glowing glory. You also pick up a few fascinating tidbits, such as the fact that before the late 19th century lettering on signs was something of a novelty. Because most of society was illiterate at that time, most storefronts used some kind of generic hand-painted image as a marker; such as a tooth for a dentist’s office.

The signs at the museum come from all different eras and have served all sorts of businesses. Some of the signs are of unknown origin; they’re not actually sure what kind of business the sign once served. I found this oddly disturbing. It’s one thing for an ancient clay pot in an art museum to be shrouded in mystery, but to have that level of missing information in this country, with its relatively short history seems intuitively wrong. I don’t know, am I just spoiled? Is knowledge really that tenuous? 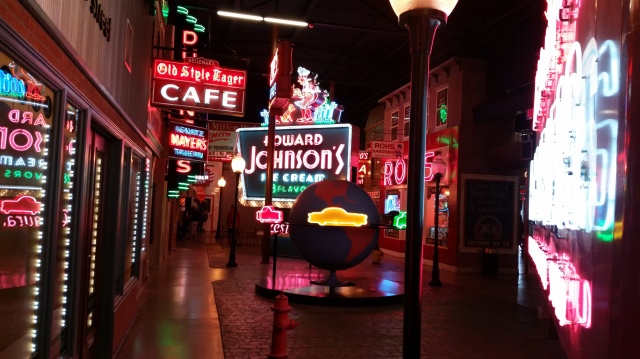 What the American Sign Museum is, above all else, is a dazzling visual spectacle. Their main room is a recreation of an old-style American Main Street bathed in an epileptic shower of neon. Divorced of their original commercial purpose one can simply admire the artistry of the signage, because they are works of art, after all. Part of the museum’s mission is to remind us of that. They have multiple exhibits that highlight the careers of some of the important sign artists of the 20th century, people who, like the great TV commercial directors of today, never got the credit they deserved simply because their medium is designed to direct attention to the product. 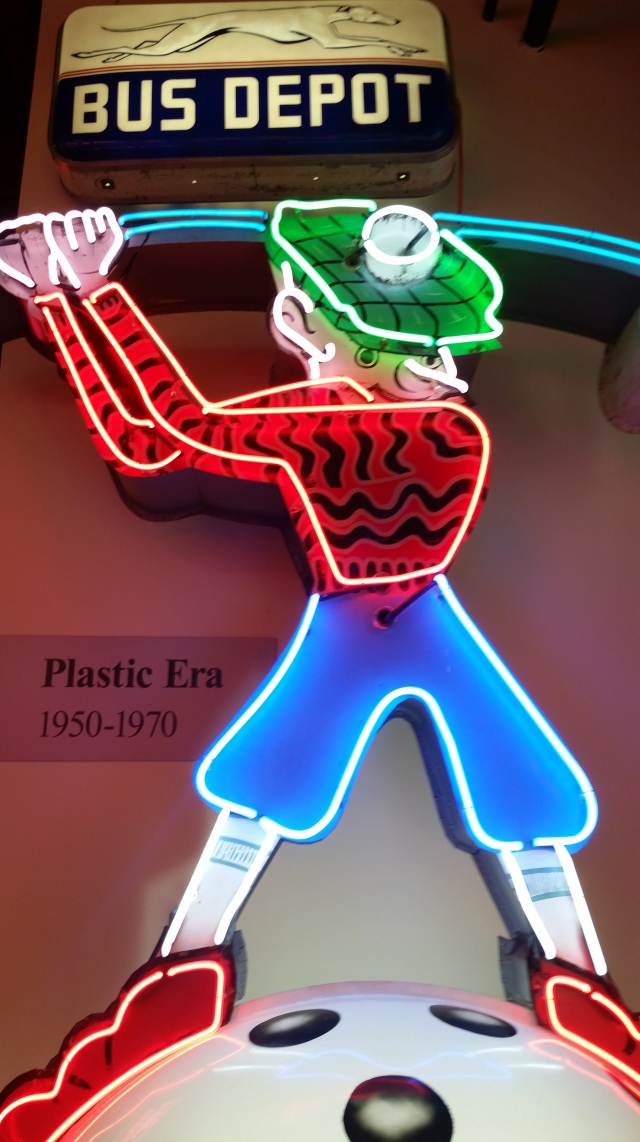 Being on the road for as long as I have been, I definitely appreciate the value of good signage. In that state the mind is hungry for distraction and advertisements can help fill that void, particularly when the natural landscape is uninspiring. I think of that North Dakota billboard that just said “Smile,” or the Cracker Barrel sign in Virginia that said “Breakfast Y’all Day.” Churches are particularly apt to put up attention-grabbing one-liners. Often these are delightfully cheesy. I remember one in West Virginia that read, “Prayer has no roaming charges.” Another somewhat more haunting church in Tennessee read, “The Devil has a Plot, but God has a Plan.”

I had a few more hours to kill in Cincy before I had to head to Indiana. I probably should have gone to the Cincinnati Zoo or some other highly regarded attraction but instead I drove to Eden Park – a huge garden oasis on a hill where the Art Museum is housed – and just chilled. I read and napped and watched the locals walk their dogs. It was a beautiful September day and the trees were just beginning to hint at their autumnal metamorphosis.

This was just what I needed. After a long, exhilarating and occasionally terrifying journey I’m content to just take it easy. I’ve begun to relish those moments where people as where I’m from and I tell them that I’ve traveled over 8,000 miles over the past 40 days. They tell me that’s impressive, and my dirty  secret is that it really isn’t. Not if a dumbass like me can get away with it. You just have to get up and do it.