Before we dive into today’s adventures, let me say a few words about an important but often neglected aspect of travel: diet.

When I began this sojourn of vagabondage, I did a pretty decent job of sticking to the healthy rations of nuts, tuna, and grain-free granola that I’d brought along for the ride. After several days, however, my food ran out and my discipline began to break down, as the following image testifies:

I’m a sucker for junk food, and the process of road travel only amplifies it’s appeal. When you’ve been on the road for three or four hours and you finally stop — for gas, bathroom breaks, what have you — you’d think that you’d want to stay still for a good hour or two, relax and decompress.

For some reason that’s not the way my brain works. If I pick out a particular destination I can’t relax until I’ve made it there. And if I stop for gas and suddenly notice that I’m famished, I have no qualms about hitting up the McDonald’s conveniently located inside the gas station. I’ll snarf that preservative-laden Frankenfood down, and when I inevitably feel the crash from that insulin spike well… that’s what coffee is for.

It’s not a good way to be. I really should have spent more time preparing for this trip, especially preparing good food. I should have, but I couldn’t. I was busy with, of all things, getting my parents’ house ready for sale. But that’s a whole other story…

I’ve spent the past three days driving from Rosburg, WA through the Eastern Oregon desert (roughly the same region where Wild, Wild Country takes place)  into Idaho where I crashed in Boise. From there it was only 5 or 6 hours to Salt Lake City, where I crashed again, and the following day I drove East again along the I-80 into Fort Collins, Colorado.

Each stretch of driving seemed more beautiful than the last. This part of the country is wide, arid, and largely barren (except for cattle and windmills), but visually it can be so arresting that I often fear I’m going to veer off the side of  steep mountain curve if I spend any more time staring at a particular gorge, bluff, or river.

But the Mountain West isn’t just good for the eyes. Something about the thin, dry air helps me think more clearly. Summer here is hot but not nearly as suffocating as the Midwestern sweat lodge I’m used to. What is it about this climate, this environment that just makes one feel so free? Tell me, smart people. I want to understand the science of it.

Hanging out in Boise, Idaho, I got up early and went to the nearest laundromat I could find. I dropped my clothes off and headed downtown. I parked just outside Slow by Slow coffee, where I had probably the best espresso shot I’ve tasted on this trip. Then I proceeded to tool around downtown, and came across some scrumptious street art which I’d like to share with you:

Boise strikes me as a refreshing combination of College Town Hip and Rocky Mountain Rugged. It’s friendly, easy to get around in, and replete with trendy coffee shops and clothing stores. But one particular incident truly endeared my heart to the city…

After I had finished my business at Slow by Slow Coffee, I realized with grim horror that I had forgotten to put any money in the parking meter. I rushed outside, hoping my rented Toyota Corolla hadn’t been towed. The car was still there, but there was a ticket stuffed under the windshield wiper.

It was a warning. Any other city would have pounced on the opportunity to plunder my pocketbook. I was overjoyed. Perhaps, I thought, kindness and humanity are not extinct ideals. There’s still room for forgiveness, for understanding. Civilization is not collapsing after all. The authorities in Boise have proved it…

I thought these things as I drove East out of Idaho, then I turned on the radio and listened to right-wing AM commentators defend Trump’s obsequious embrace of Russia’s dictator.

I got into Salt Lake City around rush hour, stopped for a quick oil change and then headed to my Airbnb destination. This was the house I stayed in: 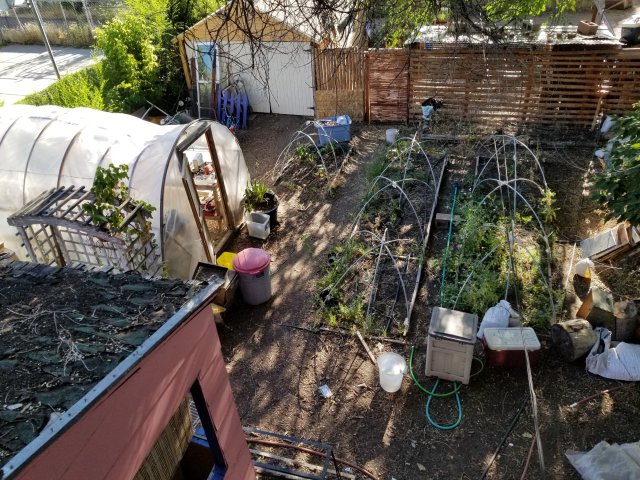 My host warned me that the roosters in the backyard might wake me up in the morning; I was almost disappointed when they didn’t. She’s an urban farmer, an energetic and freewheeling woman whose hippie demeanor belies the fact that she’s actually an intensely-driven type-A personality. She had originally come to compete in Salt Lake for the Winter Olympics in ’02 but ended up settling there and starting a community farm which served the various troubled ex-Mormon runaway teenagers that are so prevalent in that city.

She was an incredibly fascinating person and if I had spent more than one night in town I would have tried to get to know her better. Perhaps strangest of all, she actually read my blog. I couldn’t believe that. Many of my best friends don’t read this blog. When I tell other Airbnb hosts (or strangers more generally) that I write a travel blog the usual reaction involves eye rolls or grunts of “huh.”  Not that that offends me; I totally get it. I don’t know why I do this either.

The next day I got up early again, determined to visit Temple Square before it got too hot. Temple Square, of course, is the headquarters of the Church of Jesus Christ of Latter Day Saints, a wide open and totally free space which includes (among other things)…

And of course, the legendary Salt Lake Temple…

It took 40 years to build this building. As a nearby informational sign explains, “Granite rock used in its construction was hauled 23 miles by ox-drawn wagons from Little Cottonwood Canyon.”

Regardless of how you feel about the LDS religion, you have to respect the amount of work that went into this building, and really into Salt Lake City more generally. SLC sits in an inhospitable desert valley that a handful of highly committed people somehow converted into a city capable of housing more than a million people.

To me, the story of Joseph Smith, the Mormons, and Salt Lake City is one of the greatest stories ever told, and it encompasses so many of the peculiarities and contradictions that make America such a strange and wonderful place.

A guy in the untamed backwoods of 19th-century upstate New York finds (or claims to find) a set of golden plates on his family farm which (he claims) contain the writings of a tribe of ancient and heretofore undiscovered Isrealites who had migrated to the land now known as America, where they fought a seemingly endless series of wars before Jesus showed up to preach to them.

(Yes, I’ve actually read the Book of Mormon. Yes, it really is this crazy).

The self-proclaimed “Prophet” from Upstate New York shares his “discovery” with the disaffected farmers of the American hinterland. They follow him in droves, devoting their lives to his cause and helping him build a new religion from scratch. In the process they face severe discrimination and often violence from their neighbors, forcing them to move further and further West until they finally give up on America altogether and decide to set up shop in what was then the wasteland of Northern Mexico.

They build ditches, they irrigate farms. They fight tooth and nail to survive, to maintain internal order, to fend off the assaults of the U.S. government. They manage to erect one of the cleanest, most well-organized, most beautiful cities in America and eventually earn the respect of the outside world. They do all of this driven by a sacred vision, a holy calling to erect a new Jerusalem where purity and righteousness would reign supreme.

And ultimately, it all came to this:

Salt Lake City is a fascinating paradox. It’s actually one of the most gay-friendly cities in the U.S.; indeed I had my morning breakfast that day on the front patio of a cafe with a gigantic Pride flag, located on a street named after Harvey Milk. On the flip side, there’s also a large population of homeless, drug-abusing teenagers who flee the tyranny of the Church and find themselves without any structure. If you look hard enough, you could construe almost any aspect of the city as building off, reacting to, or rebelling against the work of the Church.

LDS beliefs seems to seep into the broader culture of Salt Lake City in unexpected ways. Take the idea of food storage. Mormons are taught to keep stores of non-perishable food in their homes in preparation for the supposedly-inevitable apocalypse. But apparently non-Mormons do this as well. My Airbnb host, who was about as far from a conservative Mormon as a human being can get, boasted of how she was able to live for weeks off of her food stores when she was too busy to make food.

Both Boise and Salt Lake City are meccas of civilization tucked away in a vast expanse of mountainland where still can’t help but think that human beings weren’t meant to live. They are the products of humans and groups of humans with much greater fortitude, ingenuity, and vision than I’ll ever possess.

I’m proud to reap the fruits of their labor.

REMINDER: My friend Peter and I have less than a week left to reach our crowdfunding goal for our movie, “Sergey’s Fortune”! If you like what I do here, please consider chipping in $5 to a project that stands a much better chance of advancing my prospects as a writer. THANK YOU!

One thought on “GOTH 2018 Part VIII: Mountains, Mormons, and Munchies”