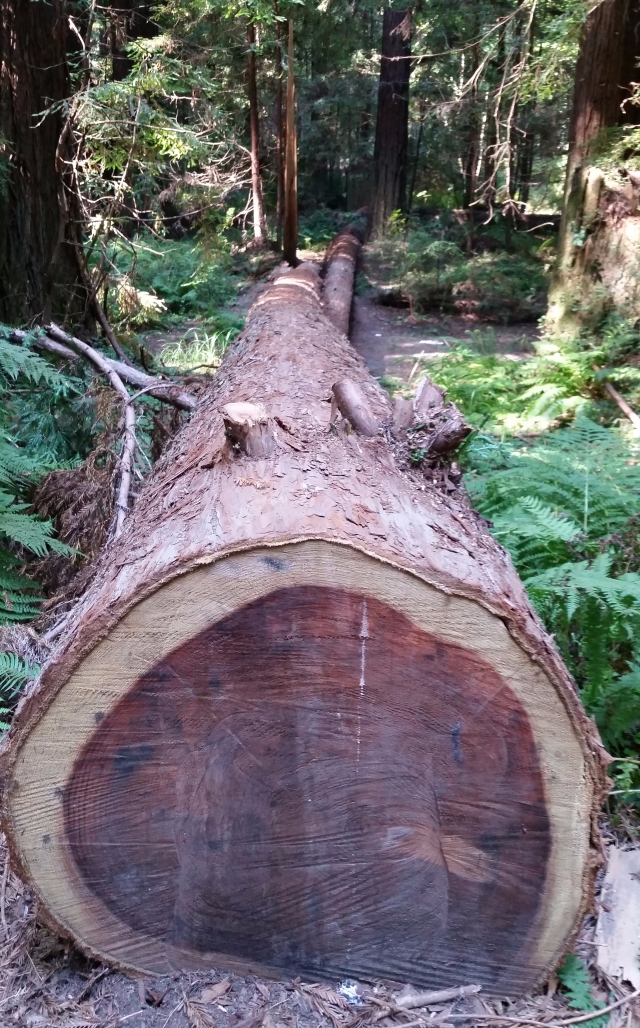 As I drove through Mendocino County’s wine country this morning I couldn’t help but feel bad about the quality of this morning’s post. I admit it was a bit rushed – I needed to get out of the house so that my host could go attend this thing she calls a “job” – and you guys deserve better, especially coming a day after I didn’t post anything.

So here are a few random thoughts that have been fermenting in my head for the past 24 hours or so:

First of all, I forgot to give a shout-out to the Lost Buoy Hostel in Newport, OR, where I stayed two nights ago. Having never stayed in a hostel before, I was expecting a grimy, vermin-infested slum where I’d have to guard my wallet and cell phone with my life. Honestly I would have settled for that, but instead I was treated to a gorgeous re-purposed home with a clean bathroom, a living room, and a full-use kitchen. There were piles of board games, books, vinyl records, even an Atari. The couple that owns the place kept chickens in the back yard and let us eat the eggs for breakfast! All of this for the astonishing rate of $34 a night. I’ve stayed at motels that really were vermin-infested slums and payed twice that amount. I definitely owe these people a five-star review.

I also owe a big shout-out to my friend Elizabeth and her husband Greg for putting me up in their Fort Bragg abode last night. I came in late at night hungry and disheveled after a long (and often terrifying) drive and they received me with uncommonly generous hospitality. We nursed a few IPAs (the only type of beer you’re allowed to drink on the Northwest Coast) and they told me about life in Fort Bragg.

Fort Bragg is an obscure coastal town in Mendocino County situated in the midst of lumber mills, fisheries, tourist beaches, and – if you venture far enough inland – outlaw pot farms guarded by shotgun-wielding scallawags. The weather is cool and temperate year round, with constant wind and rain that roughs up the local architecture. The population is a curious stew of typical California beach bums, redneck lumber mill workers, and retired Bay Area yuppies.

One thing I’m beginning to notice is just how much fun it is to spend time in these small, coastal tourist towns. I had a blast during my one night in Newport; I walked from the hostel down to their Historic Waterfront, a cozy, breezy stretch of bars, restaurants, candy stores and tourist traps. I stopped in a dive bar where everyone seemed to know each other and watched a band of baby boomers belt out blues rock covers. Later I went down to the docks where sea lions hang out on floating platforms; four or five of them together, laying prone like junkies and occasionally waking up to bark at the gaggle of tourists.

I would probably grow restless living in a place like Fort Bragg or Newport, but for a one or two-night visit they’re perfect. You can dig the soul of such a town in a relatively short time and on a relatively modest budget, without having to fret over parking or serious crime. Even though I still consider myself a city person, I need to start adding more stops like these on the Tour.

Driving out of Fort Bragg, I wanted to take my time heading to the Bay Area. Elizabeth and Greg told me to take Highway 128 rather than the traditional route of going East on 20 and quickly reconnecting with 101. I’m glad I took their advice. Highway 128 is as scenic as any highway I’ve driven through on this Tour. After veering off the coast through more gorgeous Redwood Forest land it leads into Mendocino’s Wine Country.

Gazing at the rolling hills and picturesque vineyards with signs offering wine tastings during the day, I was seized with an impulse; I should go to a wine tasting. It was a silly idea; I know basically nothing about wine and am about as familiar with its culture as I am with 19th century maritime law. But the Muse had spoken, and on the Ghost on the Highway Tour the Muse must be obeyed.

I ended up stopping at a winery called Foursight in the town of Boonville. The hostess, who immediately recognized that I’m several tax brackets below her typical clientele, did a great job putting up with my ignorance and my aimless ghostly vagabondage. She showed me a few of the winery’s Sauvignon Blancs and their prized Pinot Noir, then gave me a brief lecture on how the California drought of a couple years ago allowed them to grow a very sweet and very rare Semillon. I did end up purchasing one of their Pinots before going on my merry way.

Alas, civilization calls. I’m headed to the Bay Area and honestly I’m not entirely sure what I’m going to do. My visitation plans are becoming less and less refined as the Tour marches on, but the Muse is growing ever bolder.