There were a few potential ways I could have attacked Virginia. I knew for sure I wanted to land in Baltimore by the weekend, so what I desired was a stopover that was charming, convenient, and affordable. Should I drive through the Western mountains and hit up the hip college town of Blacksburg, as my aunt suggested? Should I try my luck in the big city of Richmond? Scrolling through the coastal towns in the Southeast corner of the state, I found an Airbnb listing in Virginia Beach for $20/night.

Already sold by the price, I started thinking up other reasons to justify passing through the region. Blacksburg sounded a bit too much like a redux of Asheville, and no one I talked to had anything good to say about Richmond. Besides, despite spending so much days near various coasts, I’d spent precious little time at an actual beach.

Nothing quite prepared me for what I would experience down there. And I don’t mean the resplendent majesty of the ocean or anything like that, I mean the sheer crass consumerism that infects the entire beachfront. I’ve been to many touristy areas both before and during Ghost on the Highway, but Virginia Beach just takes touristiness to a whole new level. 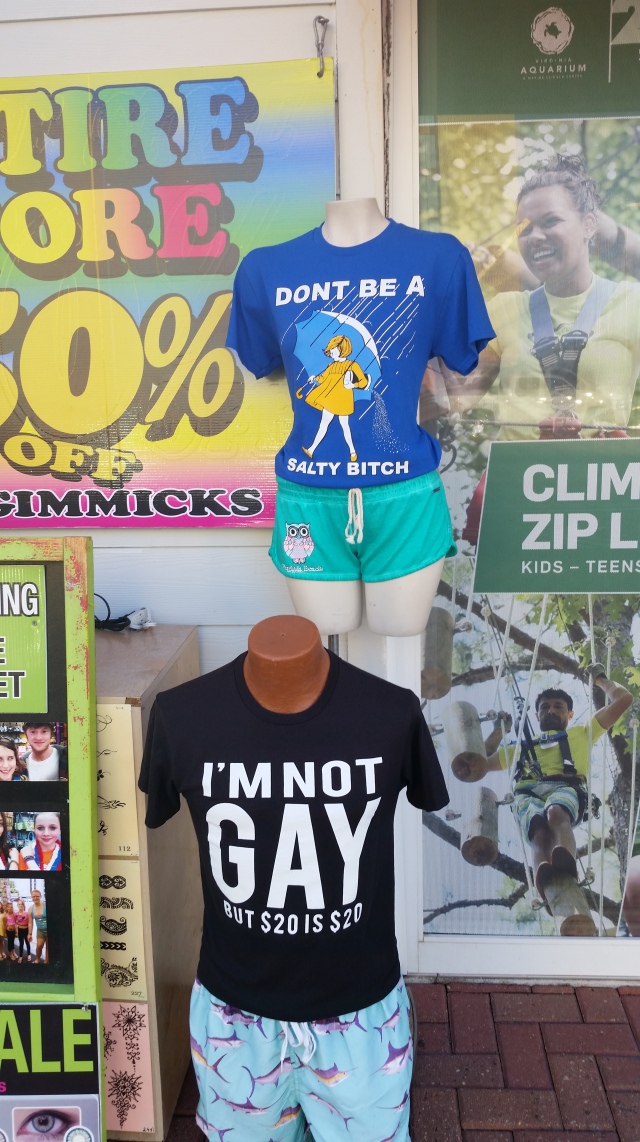 I walked past block after block of barely distinguishable gift shops. Beach towels, folding chairs, refrigerator magnets, shell-shaped earrings… the exact same items in every single store. For all I know they’re all owned by the same guy. Everything that wasn’t a gift shop was a pizza joint or an ice cream shop. Everything that wasn’t one of those was a front for some kind of expensive tourist experience. Wanna try indoor skydiving? How about ziplining?

And the T-shirts… oh lord, the T-shirts. I’ve seen some embarrassing bro-Ts in my time, but never such a high concentration of ridiculous apparel as in the shops of Virginia Beach. 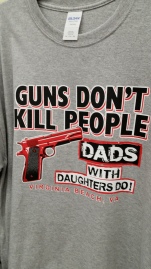 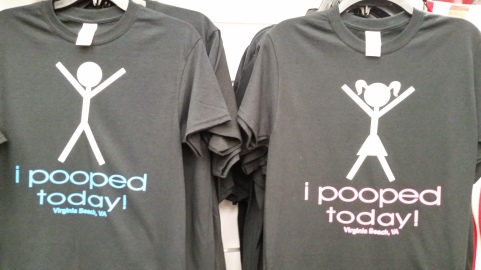 I began to realize that my imagination – a critical ingredient for any writer’s success – is severely inadequate, because I simply cannot fathom the sort of mind that would put such a thing on their body without any degree of irony. Even in the age of Trump it somehow seems unbelievable that there’s a market for these messages.

The touristiness of Virginia Beach was so extreme that it actually became rather comical. And if you could manage to ignore it you’ll find that the beach itself is actually quite relaxing.

I spent most of my time reading and trying to figure out what to do in the remaining week or so of my journey. When I finally felt guilty for being so lazy I decided to pop over to nearby Norfolk.

Norfolk is home to the country’s largest Naval base and military culture seems to predominate. I checked out the USS Wisconsin (BB-64), a WWII-era battleship which is permanently retired in a Norfolk harbor. I’m not a naval expert but it is quite a sight to behold, and there’s plenty of plaques with fascinating stories about the ship’s 5 decades of service.

Still somewhat unsure of what to do with myself, I stumbled into the Douglas MacArthur Museum. This was an opportunity to study a fascinating and accomplished figure of U.S. military history. And, more importantly, admission was free.

General MacArthur is a complex figure. His military career is long and distinguished and I admit I didn’t have enough time to truly appreciate all of it on display at the museum, just as I don’t have the space to adequately convey it here. To me the most interesting aspect of his life was his controversial 1951 dismissal as Commander of the US forces in Korea. He wanted to expand the war by attacking China, who by then had sent 300,000 troops onto the Korean peninsula. President Truman said no, fearing that this would lead to World War III. General MacArthur fumed about it publicly, challenging the authority of the President and the tradition of civilian control over the military. He was subsequently fired but a great many Americans sided with the General, and at one point there was a nascent movement to nominate MacArthur as the Republican candidate in the 1952 Presidential election.

The merits of MacArthur’s firing is still hotly debated by historians and the museum does a respectable job of presenting both sides. I have to admit I probably agree with Truman that taking the war into China would probably have been a disaster, but then again here we are in 2017 and the situation in Korea still hasn’t been resolved.

Speaking of things that haven’t been resolved, I spent most of that morning listening to Norfolk/Hampton area public radio where the subject of Confederate monuments was being debated. This is an extremely contentious issue right now, with some arguing to tear the monuments down, some fighting to keep them, and a great many trying to split the difference through a whole host of strange ideas (a few radio callers wanted to keep the monuments but move them to the actual fields of battle, thinking this somehow makes a difference).

The intentions behind those who want to remove Confederate monuments are noble indeed, but boy do they have a long way to go if they want to erase Confederate pride from the South. Driving through Dixieland for a little over a week I passed by countless streets, schools, state parks and statues honoring various Confederate leaders and soldiers. It’s ubiquitous and deeply embedded in their culture. Part of it, I honestly think, is the simple human desire to be relevant, to matter. A lot of these podunk towns in Arkansas and Tennessee and Georgia have nothing going for them; people grow up there and raise kids there and spend their whole lives there and know deep town that there’s nothing truly unique about the place they live. But being situated near a Civil War battlefield… that’s something. People create histories in order to give meaning to their own lives. We’re all guilty of this to some degree. Everyone celebrates the Fourth of July but did anyone of us have anything to do with the actual American Revolution? Of course not. Most of us came here long afterward. It’s another artificial means we invent to make us feel good. It’s silly but it’s human.

That being said, the link between Confederate culture and white supremacy is deep, disturbing, and undeniable. Not every person who flies the Confederate flag is racist, but every racist flies the Confederate flag. This ought to at least give pause to the people who argue that keeping such imagery in the public sphere is simply “honoring history.” I’ve seen people flying the Confederate flag in places like Carlsbad, New Mexico and Aberdeen, Washington. When I see a non-Southern person brandishing the stars and bars, I feel certain beyond any doubt that that person is a racist.

Nevertheless, as long as these monuments are still here I feel like I should visit a few of them on this Tour, not to honor the Confederacy but just for the simple novelty of seeing something that will probably be gone in 20 years. And downtown Norfolk has just such a monument:

This statue, which locals call Johnny Reb, honors the final meeting of the Union of Confederate Veterans in 1951. It is massively controversial and supposedly the city leaders are planning to take it down sometime soon.

As I was taking this picture I overheard some conversation by a group of teenage bikers who were hanging out at the statue’s base (one of which you can see in the photo). One kid mentioned that people are trying to get the monument taken down.

I sighed. If I come back to this region in 5-10 years I’ll probably spot that kid wearing one of those t-shirts from Virginia Beach.