Longtime readers of this blog may have noticed that when it comes to cities I’m attracted to a particular aesthetic. Whereas most of the world seems to prefer their surroundings to be sleek, polished, and new; I like things that are older, more weathered, more gritty. I like things to be rough. Not rough to the point of squalor, as with the sad decrepitude of America’s urban ghettos, but I do want a place to look like it’s been through some fascinating times. I want to look at an apartment building, a bridge, a park bench, and feel the weight of all of the thousands of stories to which it bore witness.

Thus it was highly fortuitous that I impulsively decided to stop in Butte, Montana for a few hours on Tuesday. Butte is a city of about 36,000 nestled on the slope of a hillside overlooking a panorama of Rocky Mountain glory. Like so many places in the American West it’s the product of the boom-and-bust cycle of late 19th century industrialization, a motley community that hastily and haphazardly sprawled up around dozens of mining camps. Butte seems to have sprung up like a weed in the 1870s before its growth was promptly and decisively stunted.

The mining money is long gone, the water is apparently poisoned (some call Butte the Flint, MI of the West), and modern Buttians (is that what they’re called? I have no idea) are left with few job opportunities. But man, do they have some incredible homes. Like crustaceans crawling into the shells of a larger creature, the people of Butte can live in gorgeous (though certainly well-worn) Victorian homes for a third or a quarter of the price they’d fetch in most American cities. 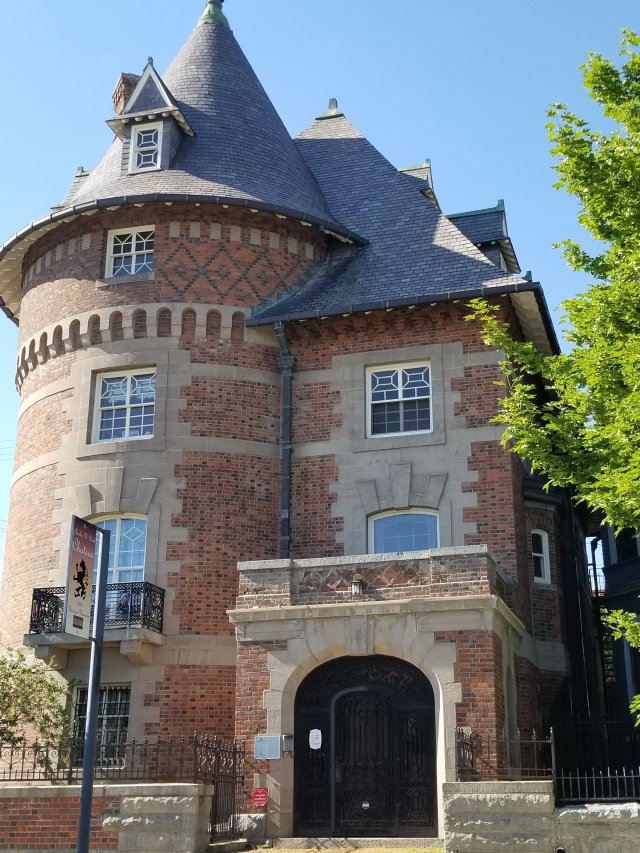 Butte is an historic city that has, for the most part, resisted the obnoxious over-gentrification that has infected almost everywhere else in the U.S. It’s quiet and dusty and cooled by gentle mountain breezes. You can walk through its modest downtown and gawk in wonder at resplendent manors that were probably once the domiciles of mining company bosses but now are occupied only by a couple of homeless tweakers sitting on the front steps. You can park almost anywhere (another thing I truly value about cities) and there are just enough local coffee shops, theatres, and breweries to keep you entertained.

Butte is proud of its history, warts and all. Observe, for example, the understated landmark of the Copper Block: 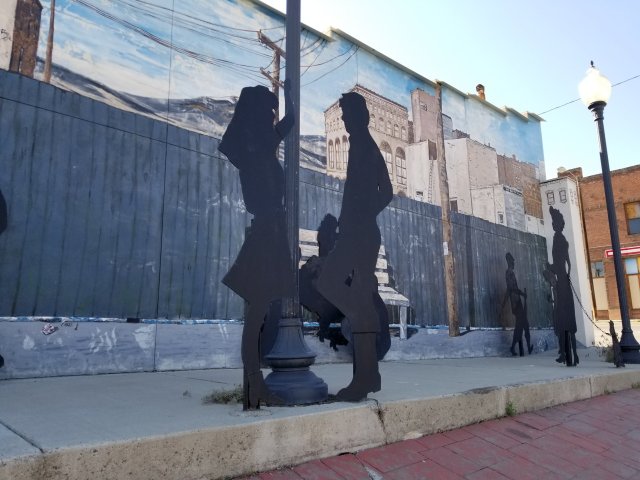 The Copper Block was the city’s red light district, a vibrant center of prostitution that contributed massively to the local economy. Almost every major Western city that developed around mining or heavy industry featured such highly profitable brothels (and the madames that controlled them were among the first women in the United States to have real political power) but it’s impressive to see a place like Butte openly acknowledge this chapter of their history, seemingly without apology or moral sanctimony.

I felt compelled to spend an hour or two at the World Mining Museum, which aims to reconstruct a typical 19th century mining village in all its rugged splendor… 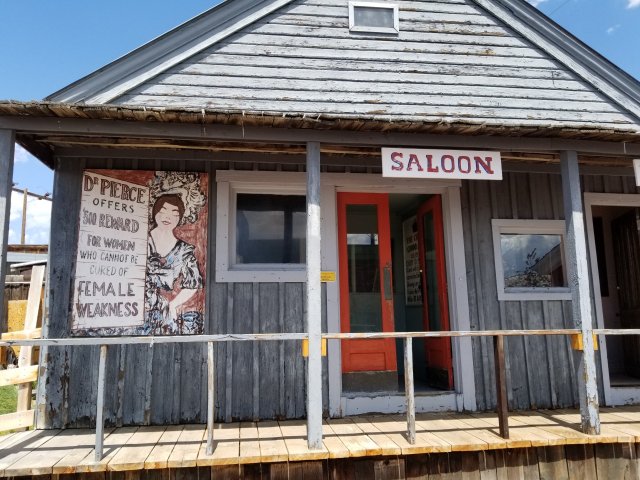 I love this era of American history, and I respect their attempts to honor and preserve it. Reading the descriptions of the antique air compressors, hoists, and turnsheets, I made an honest attempt to try and understand just how all of this shit works. I couldn’t. My mind is not geared toward engineering, for me it’s all just magical in its complexity. Equally baffling is the physical and mental strength of the men who had to endure such labor, 6 days a week for decades and decades until they died, all of it the necessary grunt work to build a world where a dumbass like me can wander around the country with a Toyota, a laptop, and a smartphone, all of them obtained through the wages of a job that does no meaningful good for anyone and requires nothing but the barest of intellectual skill.

If these Miner Ghosts despise me, I can’t blame them.

Wandering through the reconstructed village at the Mining Museum, I came across a replicated music store and was taken by this cute little guitar: 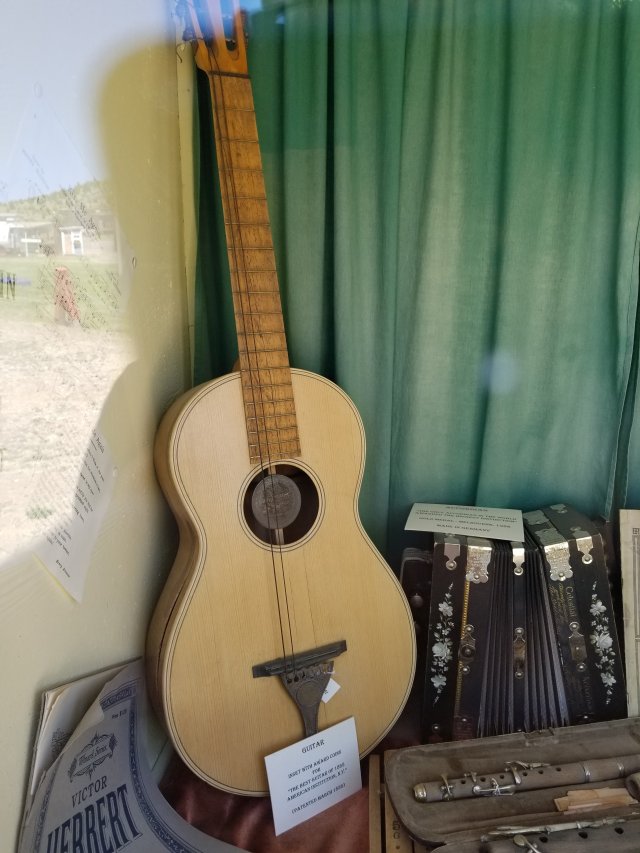 I snapped a quick pic, thinking about how much my dad (a classical guitarist) would have enjoyed it. Then I caught myself. It’s been four months today, and I still have moments where I think about something I’d like to say to my dad, or wonder what he thinks about this or that thing in the news. Same thing with my mom. It happens all the time; it’s as though some component part of my brain is missing a software update. These moments don’t necessarily make me feel nostalgic or sad — although they can — just mildly embarrassed.

In a similar vain I occasionally dream about my parents. Generally these dreams are benign and desultory; the fact that my parents are still alive is usually the least weird thing about them. One time, however, I did have one of those stereotypical soul-reckoning dreams one might expect a bad writer to have.

I dreamed I was having lunch with my mother in some hotel dining hall [this was after my mom had died but before my dad passed]. Out of nowhere my mom, who usually went out of her way to validate my ego, started haranguing me about my life. What was I doing? What was my plan? Why didn’t I appear to have a sense of direction?

Taken aback, I tried to formulate a response, but before I could open my mouth something interrupted me. I don’t recall the exact circumstance, but something forced me to excuse myself and go up out of the dining area and into the hotel. There I stumbled into an ad hoc adventure, a veritable movie’s worth of fights, challenges, romances, and triumph. I don’t recall what any of these adventures entailed (I’m simply horrible at remembering my dreams) but I do remember vividly how it felt; as though I had performed a classical hero’s triumph over his own internal weaknesses.

I returned to the dining hall to talk to my mother. I wanted to tell her that I was turning my life around, that I was getting further with my writing, re-examining my goals and forming a positive vision of what the future might bring.

But by then, of course, the plates and glasses were empty. She had left the table.