I had peculiar moment the other day. It was my second full day in Rosburg, WA; I had gotten in late (around 1:30 in the AM) after spending the previous day visiting friends in Seattle.

The drive from Seattle to Rosburg is about 3 and a half hours, and after a long day of driving and (very moderate) drinking and some deep and emotional conversations I was so burned out I thought the ride home would kill me. Rosburg is a super remote settlement (it can hardly call itself a town) along the banks of the Columbia River and getting there entails a long ride along steep, narrow, winding roads through the barely-tamed Northwest wilderness. Amazingly I managed to make it back without hitting a deer or careening off the rail-less road into the river, and when I got back I was as burnt out as I’d ever been throughout my GOTH experience.

The next day I had no plans to meet with anyone. I wanted to stay planted in the Airbnb house I’d rented, hunker down, and do some writing. I wanted a quiet, productive day.

The day I got was satisfyingly quiet enough (apart from the arresting cacophony of bird noises, so many of them fascinating and decidedly unfamiliar) but it was not productive. I woke up late, I checked Facebook, I watched pointless YouTube videos and baseball highlights. I was too lazy to make myself anything more complicated than granola and milk. Before I knew it it was 4 o’clock and I’d accomplished absolutely nothing.

I decided to call the day a wash, drive into the nearby town of Calthumet and get a pizza. And that’s when the peculiar thing happened. All day long I’d felt lethargic, disheveled, sloth-like. But as I turned the ignition and made my way down those serpentine roads I began to feel more and more invigorated. Before long I was awake and felt like something resembling an actual human being again.

Have I become addicted to driving? Is that the state that my body now considers “normal”? It certainly seems reasonable considering that over the past week or so I’ve spent more hours driving than doing almost any other activity. I came out here hoping for a type of psychological transformation, but this is not the one I expected.

Let’s back up a bit. It was Wednesday, July 11 when I left Missoula. My original plan was to drive the I-90 to Seattle and then hop on the I-5 south to southern Washington, but at the last minute I had an idea. I remembered that last year someone told me that if I was passing through Western Washington state there was the cute little place I simply had to visit. This person (I honestly can’t remember who) described a cute little town nestled in the mountains where all the architecture was preserved in a Bavarian style.

I couldn’t remember what this place was called. Something with an L. I asked Rachael (whom I originally thought might have told me about the place) but she couldn’t either. Finally I Googled “Bavarian Town Washington State” and the mystery was resolved. Leavenworth. The town was called Leavenworth.

So I set my GPS for Leavenworth. It took me off I-90 onto a series of bumpy (usually) one-lane highways cutting across the central plateaus of Washington and into the foothills of the Cascade Mountains. After a seemingly endless trip past herds of cattle, mini-Espresso shacks and Trump signs I finally made it into Leavenworth.

Tucked away in the foothills of the Cascades (which probably look as close to the Alps as you’ll find in the United States) Leavenworth was apparently a struggling ex-logger town that made a conscious decision to adopt Bavaran-themed architecture in the 1960s. It’s a tourist trap, but a good one, and hidden between the typical hiker bro T-shirt outlets are legitimately cool shops like the Nutcracker Museum as well as restaurants, chocolatiers, and antique stores.

I’ll admit, however, that I went mainly for the pictures. So here are the fruits of my labor: 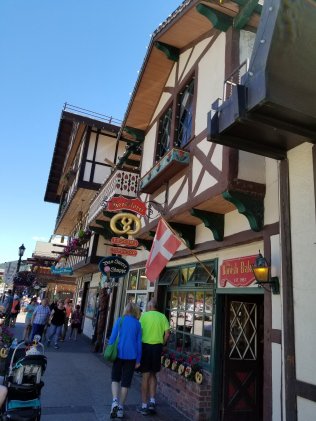 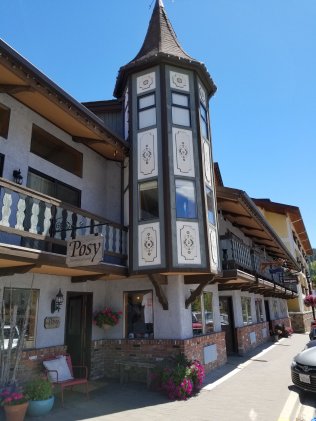 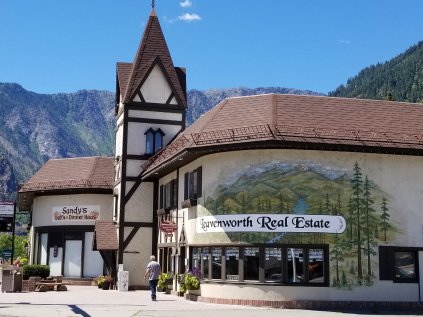 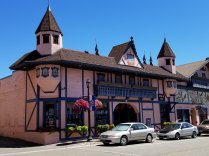 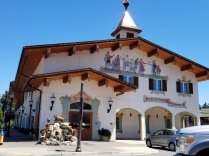 And of course, my personal favorite:

I’m glad I saw Leavenworth, but by the end of the night I would find myself wishing I’d just driven straight to Rosburg. The detour I took out of Leavenworth was not the same one I took in; instead I found myself driving West along Highway 2 through the Wenatchee National Forest. It was a gorgeous drive – almost any drive in Western Washington is – but also a long and trying one, up and down one steep incline after another along rough highways long overdue for repair, sharing the road mainly with freight trucks and campers which dwarfed my Corolla.

When I finally passed out of the mountains and into civilization, things only got worse. It was 4 in the afternoon and the I-5 was a parking lot. When I wrote about Seattle last year, I don’t think I really did justice to the area’s burgeoning traffic problem. It’s bad, folks. Really bad. It seemed tolerable when I lived there 10 years ago (granted I didn’t do a whole lot of driving in these collegiate years) but the booming economic growth of the Puget Sound area combined with its inherent geographic constraints (there are only so many ways to get into a small strip of land surrounded by mountains and water) have created a nightmare scenario that no one seems to know how to fix. Among cities I’ve encountered only L.A. and Atlanta even compare in the cruelty of their congestion.

Thus, when I found myself crawling along at 4 mph on the interstate south of Tacoma, tired and dehydrated and fearing I wouldn’t reach my final destination in time for sunset, my composure began to unravel.

I called my sister, partly to pass the time but also to check in. Despite her repeated and sincere insistence that I shouldn’t feel bad about leaving the family behind for two weeks, the guilt still gnaws away like a termite, and any sign that things aren’t 100% okay back home can send me into an emotional tailspin.

I didn’t seem to catch my sister at the best time. She seemed depressed and frustrated, at least to my ears. Some familiar inter-family grievances came to the surface. I’m not blaming her for feeling whatever she was feeling, or even suggesting that my interpretation of her mental state is accurate (remember I myself had been unnerved by 10 hours’ worth of road travel), but the way I interpreted the conversation, combined with my exhausted and fragile state, left me in a pretty dark place.

I spent the next couple of hours grinding my teeth, cursing motorists, digging my fingernails into the steering wheel. I tried to listen to an audiobook but couldn’t concentrate, tried listening to radio but didn’t like anything that was on the air. Finally I shut off the audio altogether and just sat there fuming and wallowing in self-pity. I entertained inaccurate and melodramatic thoughts, wondering if I would ever be free from these petty familial squabbles or from the fallout of our tragedy more generally. What would the rest of my life look like? What am I even doing out here? What the hell is the point of any of this?

The struggle is real, my friends.

Thankfully, traffic finally started to clear up around Chehalis, my own emotional congestion soon followed, and lo and behold I did indeed make it to Rosburg in time for Sunset. 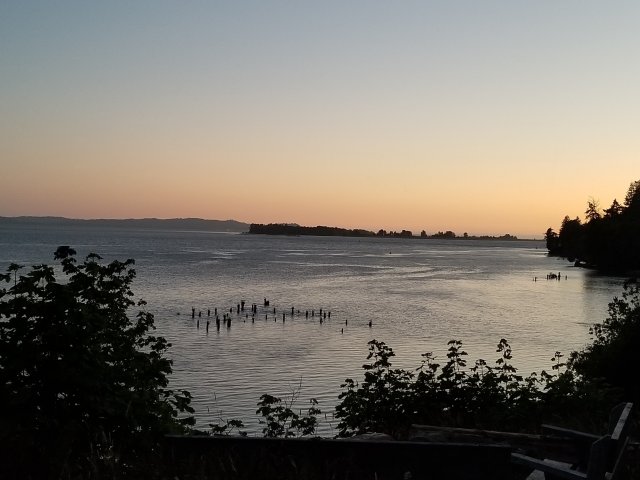 If you like that, just wait till you see the house I stayed in… 😉

(RANDOM NOTE: Hey folks, if you enjoy writing I’ve done on Ghost on the Highway, I assure you you’ll love my other work, specifically the script I wrote for Peter Mackie’s brilliant film, “Sergey’s Fortune.” Our crowdfunding campaign has only NINE DAYS left to raise $15,000 for post production. PLEASE consider clicking on THIS LINK to support the project, either by making a small donation or by clicking the “Follow” button on the page to become a follower. Either one is a huge help. Thanks!)

One thought on “GOTH 2018 Part VI: This is a Long Drive for Someone with Too Much To Think About”